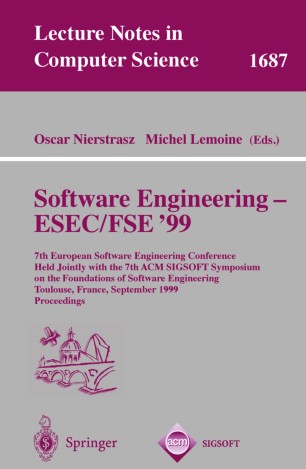 For the second time, the European Software Engineering Conference is being held jointly with the ACM SIGSOFT Symposium on the Foundations of Software Engine- ing (FSE). Although the two conferences have different origins and traditions, there is a significant overlap in intent and subject matter. Holding the conferences jointly when they are held in Europe helps to make these thematic links more explicit, and enco- ages researchers and practitioners to attend and submit papers to both events. The ESEC proceedings have traditionally been published by Springer-Verlag, as they are again this year, but by special arrangement, the proceedings will be distributed to members of ACM SIGSOFT, as is usually the case for FSE. ESEC/FSE is being held as a single event, rather than as a pair of collocated events. Submitted papers were therefore evaluated by a single program committee. ESEC/FSE represents a broad range of software engineering topics in (mainly) two continents, and consequently the program committee members were selected to represent a spectrum of both traditional and emerging software engineering topics. A total of 141 papers were submitted from around the globe. Of these, nearly half were classified as research - pers,aquarterasexperiencepapers,andtherestasbothresearchandexperiencepapers. Twenty-nine papers from five continents were selected for presentation and inclusion in the proceedings. Due to the large number of industrial experience reports submitted, we have also introduced this year two sessions on short case study presentations.