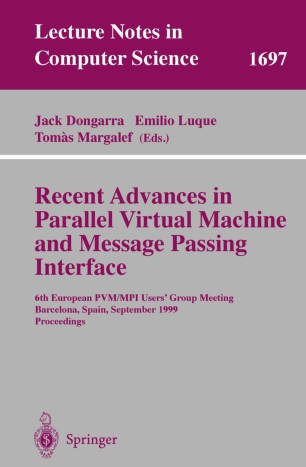 Parallel Virtual Machine (PVM) and Message Passing Interface (MPI) are the most frequently used tools for programming according to the message passing paradigm, which is considered one of the best ways to develop parallel applications. This volume comprises 67 revised contributions presented at the Sixth European PVM/MPI Users' Group Meeting, which was held in Barcelona, Spain, 26-29 September 1999. The conference was organized by the Computer Science Department of the Universitat Autònoma de Barcelona. This conference has been previously held in Liverpool, UK (1998) and Cracow, Poland (1997). The first three conferences were devoted to PVM and were held at the TU Munich, Germany (1996), ENS Lyon, France (1995), and University of Rome (1994). This conference has become a forum for users and developers of PVM, MPI, and other message passing environments. Interaction between those groups has proved to be very useful for developing new ideas in parallel computing and for applying some of those already existent to new practical fields.