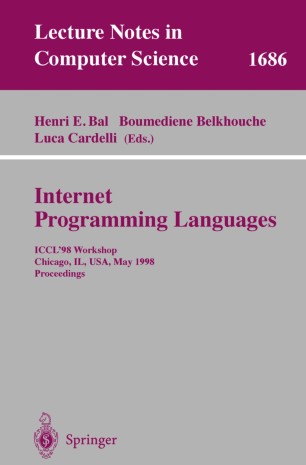 This book is a collection of articles about the influence that the recent greater scope and availability of wide area networks is having on the semantics, design, and implementa tion of programming languages. The Internet has long provided a global computing in frastructure but, for most of its history, there has not been much interest in programming languages tailored specifically to that infrastructure. More recently, the Web has pro duced a widespread interest in global resources and, as a consequence, in global pro grammability. It is now commonplace to discuss how programs can be made to run effectively and securely over the Internet. The Internet has already revolutionized the distribution and access of information, and is in the process of transforming commerce and other areas of fundamental importance. In the field of programming languages, the Internet is having a deep revitalizing effect, by challenging many fundamental assumptions and requiring the development of new concepts, programming constructs, implementation techniques, and applications. This book is a snapshot of current research in this active area. The articles in this book were presented at the Workshop on Internet Programming Lan guages, which was held on May 13, 1998 at Loyola University, Chicago, USA. The pa pers submitted to the workshop were screened by the editors. After the workshop, the presented papers were refereed by an external reviewer and one of the editors, resulting in the current selection.