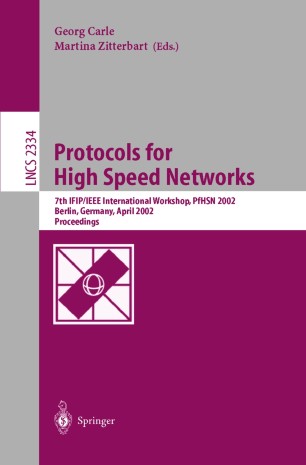 This workshop on “Protocols for High-Speed Networks” is the seventh in a s- cessful series of international workshops, well known for their small and focused target audience, that provide a sound basis for intensive discussions of hi- qualityand timelyresearch work. The location of the workshop has alternated between Europe and the United States, at venues not onlyworth visiting for the workshop, but also for the distinct impressions theyleave on the participants. The ?rst workshop was held in 1989 in Zurich. Subsequentlythe workshop was moved to Palo Alto (1990), Stockholm (1993), Vancouver (1994), Sophia-Antipolis/Nice (1996), and Salem (1999). In 2002, the workshop was hosted in Berlin, the capital of Germany. PfHSN is a workshop providing an international forum that focuses on issues related to high-speed networking, such as protocols, implementation techniques, router design, network processors and the like. Although the topics have shifted during the last couple of years, for example, from parallel protocol implemen- tions to network processors, it could be observed that high speed remains a very important issue with respect to future networking. Traditionally, PfHSN is a r- ativelyfocused and small workshop with an audience of about 60 participants.