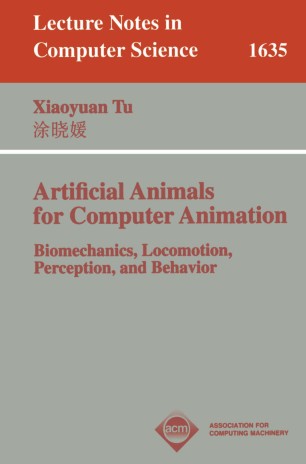 After nearly half a century of research, the Holy Grail of the ?eld of art- cial intelligence (AI) remains a comprehensive computational model capable of emulating the marvelous abilities of animals, including locomotion, p- ception, behavior, manipulation, learning, and cognition. The comprehensive modeling of higher animals –humans and other primates –remains elusive; However, the research documented in this monograph achieves nothing less than a functional computer model of certain species of lower animals that are by no means trivial in their complexity. Reported herein is the 1996 ACM Doctoral Dissertation Award winning work of Xiaoyuan Tu, which she carried out in the Department of Computer Science at the University of Toronto. Tu presents “arti?cial ?shes”, a rema- able computational model of familiar marine animals in their natural habitat. Originally conceived in the context of computer graphics, Tu’s is to date the only PhD dissertation from this major sub?eld of computer science (and the only thesis from a Canadian university) to win the coveted ACM award.