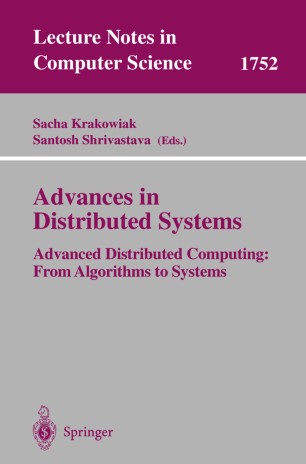 In 1992 we initiated a research project on large scale distributed computing systems (LSDCS). It was a collaborative project involving research institutes and universities in Bologna, Grenoble, Lausanne, Lisbon, Rennes, Rocquencourt, Newcastle, and Twente. The World Wide Web had recently been developed at CERN, but its use was not yet as common place as it is today and graphical browsers had yet to be developed. It was clear to us (and to just about everyone else) that LSDCS comprising several thousands to millions of individual computer systems (nodes) would be coming into existence as a consequence both of technological advances and the demands placed by applications. We were excited about the problems of building large distributed systems, and felt that serious rethinking of many of the existing computational paradigms, algorithms, and structuring principles for distributed computing was called for. In our research proposal, we summarized the problem domain as follows: “We expect LSDCS to exhibit great diversity of node and communications capability. Nodes will range from (mobile) laptop computers, workstations to supercomputers. Whereas mobile computers may well have unreliable, low bandwidth communications to the rest of the system, other parts of the system may well possess high bandwidth communications capability. To appreciate the problems posed by the sheer scale of a system comprising thousands of nodes, we observe that such systems will be rarely functioning in their entirety.