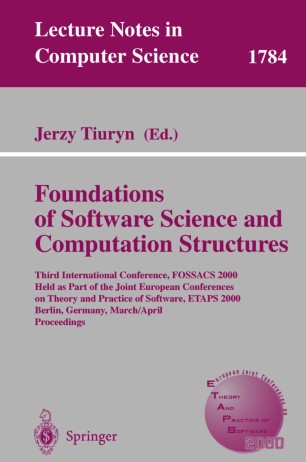 ETAPS2000wasthethirdinstanceoftheEuropeanJointConferencesonTheory and Practice of Software. ETAPS is an annual federated conference that was established in 1998 by combining a number of existing and new conferences. This year it comprisedv e conferences (FOSSACS, FASE, ESOP,CC, TACAS), ve satellite workshops (CBS, CMCS, CoFI, GRATRA, INT), seven invited lectures, a panel discussion, and ten tutorials. The events that comprise ETAPS address various aspects of the system - velopmentprocess,includingspeci cation,design,implementation,analysis,and improvement. The languages, methodologies, and tools which support these - tivities are all well within its scope. Die rent blends of theory and practice are represented, with an inclination towards theory with a practical motivation on one hand and soundly-based practice on the other. Many of the issues involved in software design apply to systems in general, including hardware systems, and the emphasis on software is not intended to be exclusive. ETAPS is a loose confederation in which each event retains its own identity, with a separate program committee and independent proceedings. Its format is open-ended, allowing it to grow and evolve as time goes by. Contributed talks and system demonstrations are in synchronized parallel sessions, with invited lectures in plenary sessions. Two of the invited lectures are reserved for \u- fying" talks on topics of interest to the whole range of ETAPS attendees.