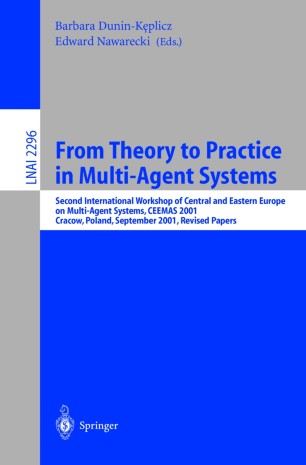 From Theory to Practice in Multi-Agent Systems

This volume contains the papers selected for presentation at CEEMAS 2001. The wo- shop was the fourth in a series of international conferences devoted to autonomous agents and multi-agent systems organized in Central-Eastern Europe. Its predecessors wereCEEMAS’99andDAIMAS’97,whichtookplaceinSt. Petersburg,Russia,aswell as DIMAS’95, which took place in Cracow, Poland. Organizers of all these events made efforts to make them wide-open to participants from all over the world. This would have been impossible without some help from friendly centers in the Czech Republic, England, France, Japan, and The Netherlands. DIMAS’95 featured papers from 15 countries, while CEEMAS’99 from 18 co- tries. A total of 61 papers were submitted to CEEMAS 2001 from 17 countries. Out of these papers, 31 were selected for regular presentation, while 14 were quali ed as posters. The motto of the meeting was “Diversity is the core of multi-agent systems". This variety of subjects was clearly visible in the CEEMAS 2001 program, addressing the following major areas of multi-agent systems: – Organizations and social aspects of multi-agent systems – Agent and multi-agent system architectures, models, and formalisms – Communication languages, protocols, and negotiation – Applications of multi-agent systems – Agent and multi-agent development tools – Theoretical foundations of DistributedAI – Learning in multi-agent systems The richness of workshop subjects was ensured thanks to the CEEMAS 2001 contributing authors as well as the keynote speakers.