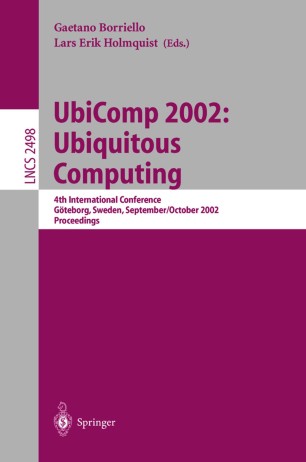 Ubiquitous computing is coming of age. In the few short years of the lifetime of this conference, we have seen major changes in our emerging research community. When the conference started in 1999, as Handheld and Ubiquitous Computing, the field was still in its formative stage. In 2002, we see the Ubicomp conference (the name was shortened last year) emerging as an established player attracting research submissions of very high quality from all over the world. Virtually all major research centers and universities now have research programs broadly in the field of ubiquitous computing. Whether we choose to call it ubiquitous, pervasive, invisible, disappearing, embodied, or some other variant of computing, it is clear that Mark Weiser’s original vision has only become more and more relevant since the term was coined over 10 years ago. But, most important in our context, the interest in the field can be gauged from the rising number of full paper submissions to the conference: from about 70 in both 1999 and 2000, to 90 in 2001, to this year's record breaking 136! Counting technical notes, workshops, poster and video submissions, there were over 250 original works submitted to this year’s conference. This is an impressive effort by the research community, and we are grateful to everyone who took time to submit their work – without this, the conference would simply not exist.