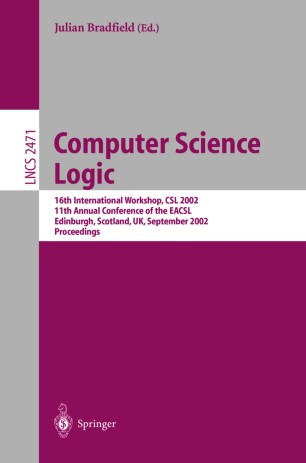 The Annual Conference of the European Association for Computer Science Logic, CSL 2002, was held in the Old College of the University of Edinburgh on 22–25 September 2002. The conference series started as a programme of Int- national Workshops on Computer Science Logic, and then in its sixth meeting became the Annual Conference of the EACSL. This conference was the sixteenth meeting and eleventh EACSL conference; it was organized by the Laboratory for Foundations of Computer Science at the University of Edinburgh. The CSL 2002 Programme Committee considered 111 submissions from 28 countries during a two week electronic discussion; each paper was refereed by at least three reviewers. The Committee selected 37 papers for presentation at the conference and publication in these proceedings. The Programme Committee invited lectures from Susumu Hayashi, Frank Neven, and Damian Niwinski; ´ the papers provided by the invited speakers appear at the front of this volume. In addition to the main conference, two tutorials – ‘Introduction to Mu- Calculi’ (Julian Brad?eld) and ‘Parametrized Complexity’ (Martin Grohe) – were given on the previous day.