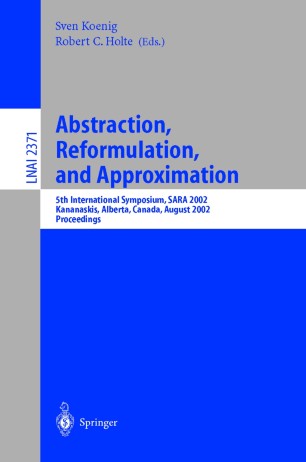 It has been recognized since the inception of Artificial Intelligence (AI) that abstractions, problem reformulations, and approximations (AR&A) are central to human common sense reasoning and problem solving and to the ability of systems to reason effectively in complex domains. AR&A techniques have been used to solve a variety of tasks, including automatic programming, constraint satisfaction, design, diagnosis, machine learning, search, planning, reasoning, game playing, scheduling, and theorem proving. The primary purpose of AR&A techniques in such settings is to overcome computational intractability. In addition, AR&A techniques are useful for accelerating learning and for summarizing sets of solutions. This volume contains the proceedings of SARA 2002, the fifth Symposium on Abstraction, Reformulation, and Approximation, held at Kananaskis Mountain Lodge, Kananaskis Village, Alberta (Canada), August 2 4, 2002. The SARA series is the continuation of two separate threads of workshops: AAAI workshops in 1990 and 1992, and an ad hoc series beginning with the "Knowledge Compilation" workshop in 1986 and the "Change of Representation and Inductive Bias" workshop in 1988 with followup workshops in 1990 and 1992. The two workshop series merged in 1994 to form the first SARA. Subsequent SARAs were held in 1995, 1998, and 2000.