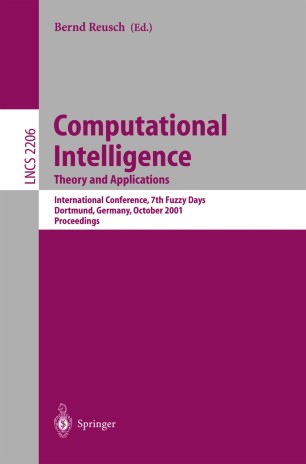 Ten years of ,,Fuzzy Days“ in Dortmund! What started as a relatively small workshop in 1991 has now become one of the best known smaller conferences on Computational Intelligence in the world. It fact, it was (to my best knowledge) the ?rst conference to use this term, in 1994, although I confess that another, larger conference was announced ?rst and the trade mark “Computational Intelligence was not coined in Dortmund. I believe, that the success of this conference is grounded on the quality of its reviewedandinvitedpapersaswellasitsgoodorganization. Fromthebeginning, we have sent every paper anonymously to ?ve referees, and we have always accepted only around 50% of the papers sent in. This year it was a little less than that. I would like to thank everybody who helped us by considering Dortmund’s Fuzzy Days as the conference at which to appear. I know that among the - stracts not accepted there were some quite good ones, but we were restricted to a ?xed number. I also know that referees do a good job but cannot always judge wisely from abstracts. Hence my apologies to those who did not make it this year. Please try again! I would like to point out that our conference also has a good regional re- tation. I am grateful to the City of Dortmund, its Lord Mayor Dr. Langemeyer, the Dortmund project, the DFG – Deutsche Forschungsgemeinschaft, the KVR – Kommunalverband Ruhrgebiet, the Martin-Schmeißer-Stiftung, and the C- line AG/Quantum GmbH for their valuable support.