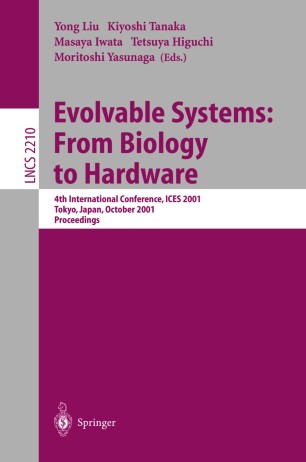 Evolvable Systems: From Biology to Hardware

On behalf of the ICES 2001 Conference Committee, it is our pleasure to present to you the proceedings of the fourth International Conference on Evolvable S- tems: From Biology to Hardware, ICES 2001, held in Tokyo, Japan, on 3-5 - tober 2001, addressing the latest developments and discussing challenges facing the ?eld of evolvable systems. The idea of evolving machines, whose origins can be traced back to the - bernetics movement of the 1940s and the 1950s, has recently re-emerged in the form of the nascent ?eld of bio-inspired systems and evolvable hardware. Foll- ing the workshop, Towards Evolvable Hardware, which took place in Lausanne, Switzerland, in October 1995, the First International Conference on Evolvable Systems: From Biology to Hardware (ICES96), was held at the Electrotech- cal Laboratory (MITI), Tsukuba, Japan, in October 1996. The second and the third International Conferences on Evolvable Systems: From Biology to Ha- ware (ICES98 and ICES 2000) were respectively held in Lausanne in September 1998, and in Edinburgh in April 2000. Following the success of these past events, ICES 2001 was dedicated to the promotion and advancement of all aspects of evolvable systems, including ha- ware, software, algorithms, and applications. By bringing together researchers who use biologically inspired concepts to implement real systems in arti?cial - telligence, arti?cial life, robotics, VLSI design, and related domains, ICES 2001 reunited this burgeoning community.