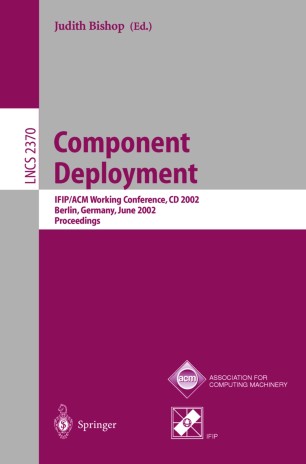 Deployment is the act of taking components and readying them for productive use. There may be steps following deployment, such as installation or m- agement related functions, but all decisions about how to con?gure and c- pose/assemble a component are made at the deployment stage. This is therefore the one opportunity in the software lifecycle to bridge the gap between what the component developer couldn’t know about the deployment environment and what the environment’s developer couldn’t know about the open set of depl- able components. It is not surprising that deployment as a dedicated step gains importance when addressing issues of system-wide qualities, such as coping with constrained resources or preparing for component adaptation and system evolution. Yet, component deployment is still a discipline in its infancy: it became mainstream practice only in the mid 1990s. Much of the best practice impulse originated in products like Microsoft’s Transaction Server and its approach to attribute-based programming and later products like Enterprise JavaBeans and now the Corba Component Model. All these address the speci?c needs of enterprise appli- tion servers. However, the potential of the deployment concept goes far beyond this. Deployment can and should touch e?ectively all truly component-based solutions. The proceedings of Component Deployment 2002 represent a good cro- section of the gamut of deployment issues. From customization to address - source constraints to recon?guration of deployed systems and from architecture to design to languages, the avid reader will ?nd some contribution.