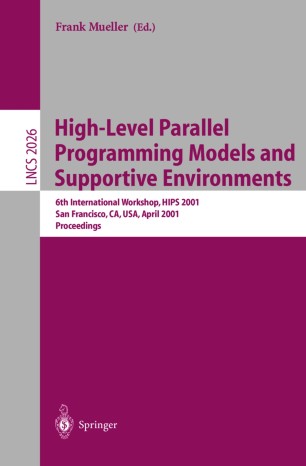 On the 23rd of April, 2001, the 6th Workshop on High-Level Parallel P- gramming Models and Supportive Environments (LCTES’98) was held in San Francisco. HIPShas been held over the past six years in conjunction with IPDPS, the Internation Parallel and Distributed Processing Symposium. The HIPSworkshop focuses on high-level programming of networks of wo- stations, computing clusters and of massively-parallel machines. Its goal is to bring together researchers working in the areas of applications, language design, compilers, system architecture and programming tools to discuss new devel- ments in programming such systems. In recent years, several standards have emerged with an increasing demand of support for parallel and distributed processing. On one end, message-passing frameworks, such as PVM, MPI and VIA, provide support for basic commu- cation. On the other hand, distributed object standards, such as CORBA and DCOM, provide support for handling remote objects in a client-server fashion but also ensure certain guarantees for the quality of services. The key issues for the success of programming parallel and distributed en- ronments are high-level programming concepts and e?ciency. In addition, other quality categories have to be taken into account, such as scalability, security, bandwidth guarantees and fault tolerance, just to name a few. Today’s challenge is to provide high-level programming concepts without s- ri?cing e?ciency. This is only possible by carefully designing for those concepts and by providing supportive programming environments that facilitate program development and tuning.