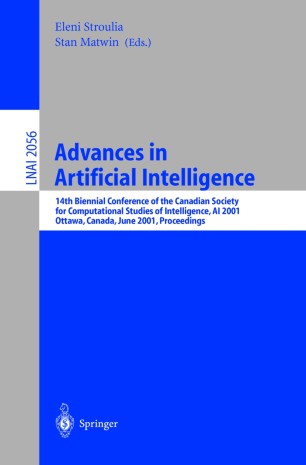 Canadian AI: Conference of the Canadian Society for Computational Studies of Intelligence

AI 2001 is the 14th in the series of Arti cial Intelligence conferences sponsored by the Canadian Society for Computational Studies of Intelligence/Soci et e - nadienne pour l’ etude de l’intelligence par ordinateur. As was the case last year too, the conference is being held in conjunction with the annual conferences of two other Canadian societies, Graphics Interface (GI 2001) and Vision Int- face (VI 2001). We believe that the overall experience will be enriched by this conjunction of conferences. This year is the \silver anniversary" of the conference: the rst Canadian AI conference was held in 1976 at UBC. During its lifetime, it has attracted Canadian and international papers of high quality from a variety of AI research areas. All papers submitted to the conference received at least three indep- dent reviews. Approximately one third were accepted for plenary presentation at the conference. The best paper of the conference will be invited to appear in Computational Intelligence.