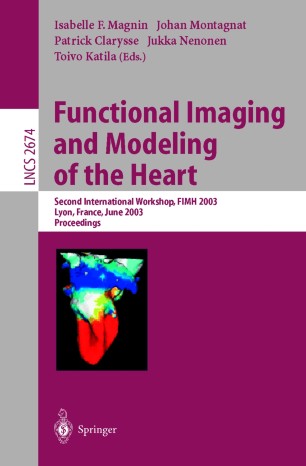 FIMH: International Workshop on Functional Imaging and Modeling of the Heart

Functional Imaging and Modeling of the Heart

The ?rst international conference on Functional Imaging and Modeling of the 1 Heart (FIMH) was held in Helsinki, Finland, in November 2001, thanks to the strongscienti?ccollaborationbetweenFranceandFinland. Thiseventwasa?rst attempt to federate the heart imaging community and to encourage collabo- tion between scientists in signal and image processing, applied mathematics and physics, biomedical engineering and computer science, and experts in card- logy, radiology, biology, and physiology, in Europe and beyond. The conference has encountered considerable success. The outstanding research works pres- ted have demonstrated a very active research ?eld with complex modeling and image analysis problems to be solved. One of the outcomes was the special issue of the Medical Image Analysis journal based on a selection of the conference’s best papers, to appear in the second half of 2003. The FIMH 2001 meeting was the starting point of a discussion for federating the European research e?ort in cardiac imaging, heart modeling, and cardiac image analysis. It was very successful, and a large coalition was created around 2 the e-Heart proposal for a Network of Excellence in the European Sixth Fra- work Program. The e-Heart network has already gathered about 200 researchers from 100 institutes. A project proposal has been submitted to the European Union. It was decided in the ?rst meeting to organize a regular biennial conference.