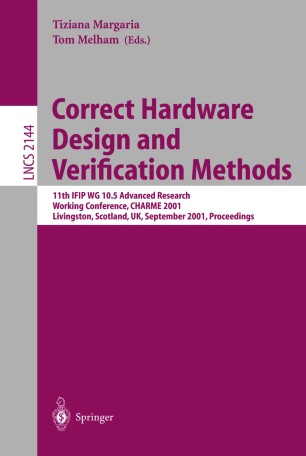 This volume contains the proceedings of CHARME 2001, the Eleventh Advanced Research Working Conference on Correct Hardware Design and Veri?cation Methods. CHARME 2001 is the 11th in a series of working conferences devoted to the development and use of leading-edge formal techniques and tools for the design and veri?cation of hardware and hardware-like systems. Previous events in the ‘CHARME’ series were held in Bad Herrenalb (1999), Montreal (1997), Frankfurt (1995), Arles (1993), and Torino (1991). This series of meetings has been organized in cooperation with IFIP WG 10.5 and WG 10.2. Prior meetings, stretching backto the earliest days of formal hardware veri?cation, were held under various names in Miami (1990), Leuven (1989), Glasgow (1988), Grenoble (1986), Edinburgh (1985), and Darmstadt (1984). The convention is now well-established whereby the European CHARME conference alternates with its biennial counterpart, the International Conference on Formal Methods in Computer-Aided Design (FMCAD), which is held on even-numbered years in the USA. The conference tookplace during 4–7 September 2001 at the Institute for System Level Integration in Livingston, Scotland. It was co-hosted by the - stitute and the Department of Computing Science of Glasgow University and co-sponsored by the IFIP TC10/WG10.5 Working Group on Design and En- neering of Electronic Systems. CHARME 2001 also included a scienti?c session and social program held jointly with the 14th International Conference on Th- rem Proving in Higher Order Logics (TPHOLs), which was co-located in nearby Edinburgh.