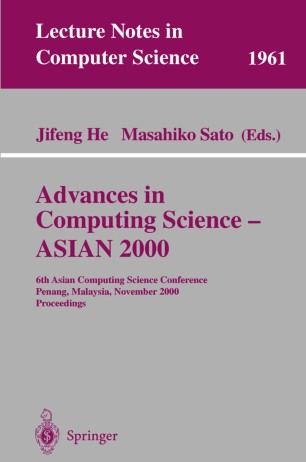 The Asian Computing Science Conference (ASIAN) series was initiated in 1995 to provide a forum for researchers in computer science in Asia to meet and to promote interaction with researchers from other regions. The previous ?ve conferences were held, respectively, in Bangkok, Singapore, Kathmandu, Manila, and Phuket. The proceedings were published in the Lecture Notes in Computer Science Series of Springer-Verlag. This year’s conference (ASIAN2000) attracted 61 submissions from which 18 papers were selected through an electronic program committee (PC) meeting. The themes for this year’s conference are: – Logics in Computer Science – Data Mining – Networks and Performance The key note speaker for ASIAN2000 is Jean Vuillemin (ENS, France) and the invited speakers are Ramamohanarao Kotagiri (U. Melbourne, Australia) and Alain Jean-Marie (LIRMM, France). We thank them for accepting our - vitation. This year’s conference is sponsored by the Asian Institute of Technology (Thailand), INRIA (France), the National University of Singapore (Singapore), and UNU/IIST (Macau SAR, China). We thank all these institutions for their continued support of the ASIAN series. This year’s conference will be held in Penang, Malaysia. We are much obliged to Universiti Sains Malaysia and Penang State Government for providing the conference venue and to Dr. Abdullah Zawawi Haji Talib for making the local arrangements. We also wish to thank the PC members and the large number of referees for thesubstantialworkputinbytheminassessingthesubmittedpapers.