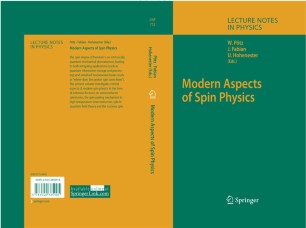 The spin degree of freedom is an intrinsically quantum-mechanical phenomenon, leading to both intriguing applications (such as quantum information storage and processing) and unsolved fundamental issues (such as "where does the proton spin come from"). The present volume investigates central aspects of modern spin physics in the form of  extensive lectures on semiconductor spintronics, the spin-pairing mechanism in high- temperature semiconductors, spin in quantum field theory and the nucleon spin.