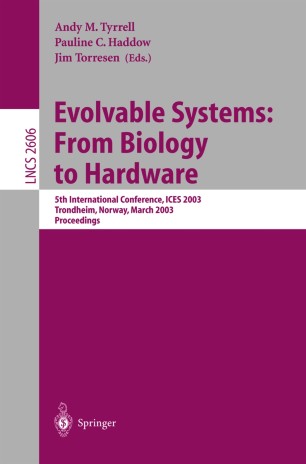 Evolvable Systems: From Biology to Hardware

The idea of evolving machines, whose origins can be traced to the cybernetics movementofthe1940sand1950s,hasrecentlyresurgedintheformofthenascent ?eld of bio-inspired systems and evolvable hardware. The inaugural workshop, Towards Evolvable Hardware, took place in Lausanne in October 1995, followed by the First International Conference on Evolvable Systems: From Biology to Hardware (ICES), held in Tsukuba, Japan in October 1996. The second ICES conference was held in Lausanne in September 1998, with the third and fourth being held in Edinburgh, April 2000 and Tokyo, October 2001 respectively. This has become the leading conference in the ?eld of evolvable systems and the 2003 conference promised to be at least as good as, if not better than, the four that preceeded it. The ?fth international conference was built on the success of its predec- sors, aiming at presenting the latest developments in the ?eld. In addition, it brought together researchers who use biologically inspired concepts to imp- ment real systems in arti?cial intelligence, arti?cial life, robotics, VLSI design and related domains. We would say that this ?fth conference followed on from the previous four in that it consisted of a number of high-quality interesting thought-provoking papers.