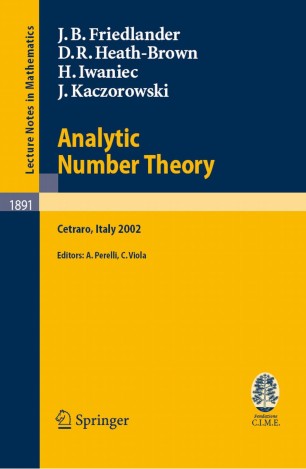 The four contributions collected in this volume deal with several advanced results in analytic number theory. Friedlander’s paper contains some recent achievements of sieve theory leading to asymptotic formulae for the number of primes represented by suitable polynomials. Heath-Brown's lecture notes mainly deal with counting integer solutions to Diophantine equations, using among other tools several results from algebraic geometry and from the geometry of numbers. Iwaniec’s paper gives a broad picture of the theory of Siegel’s zeros and of exceptional characters of L-functions, and gives a new proof of Linnik’s theorem on the least prime in an arithmetic progression. Kaczorowski’s article presents an up-to-date survey of the axiomatic theory of L-functions introduced by Selberg, with a detailed exposition of several recent results.