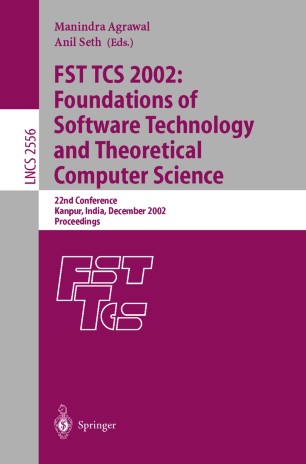 This volume consists of the proceedings of the 22nd International Conference on the Foundations of Software Technology and Theoretical Computer Science (FSTTCS 2002), organized under the auspices of the Indian Association for Research in Computing Science (IARCS). The conference was held at the Indian Institute of Technology, Kanpur during December 12–14, 2002. The conference attracted 108 submissions (of which two were withdrawn). Of these, a total of 26 papers were selected for presentation in the conference. As in the last year, the PC meeting was held electronically (stretching over nearly three weeks in August 2002) and was a great success. In addition to the contributed papers, we had ?ve invited speakers this year: Hendrik Lenstra, Jr., Harry Mairson, Dale Miller, Chih-Hao Luke Ong, and Margus Veanes. We thank them for accepting our invitation and for providing abstracts (or even full papers) for the proceedings. Two workshops were organized in conjunction with the conference – both in Kanpur. A workshop on Parameterized Complexity was held during December 10–11, organized by Mike Fellows and Venkatesh Raman. The second workshop actually consisted of three miniworkshops: on Coding Theory by Madhu Sudan; on Finite Field Algorithms by Hendrik Lenstra, Jr.; and on Sieve Theory by R. Balasubramanian. We wish to thank all the reviewers and PC members who contributed greatly to making the conference a success. We also wish to thank the team at Springer- Verlag for their help in preparing the proceedings.