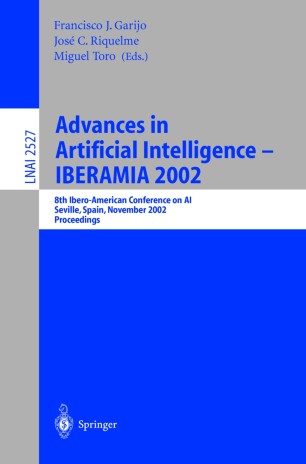 The 8th Ibero-American Conference on Artificial Intelligence, IBERAMIA 2002, took place in Spain for the second time in 14 years; the first conference was organized in Barcelona in January 1988. The city of Seville hosted this 8th conference, giving the participants the opportunity of enjoying the richness of its historical and cultural atmosphere. Looking back over these 14 years, key aspects of the conference, such as its structure, organization, the quantity and quality of submissions, the publication policy, and the number of attendants, have significantly changed. Some data taken from IBERAMIA’88 and IBERAMIA 2002 may help to illustrate these changes. IBERAMIA’88 was planned as an initiative of three Ibero-American AI associations: the Spanish Association for AI (AEPIA), the Mexican Association for AI (SMIA), and the Portuguese Association for AI (APIA). The conference was organized by the AEPIA staff, including the AEPIA president, José Cuena, the secretary, Felisa Verdejo, and other members of the AEPIA board. The proceedings of IBERAMIA’88 contain 22 full papers grouped into six areas: knowledge representation and reasoning, learning, AI tools, expert systems, language, and vision. Papers were written in the native languages of the participants: Spanish, Portuguese, and Catalan. Twenty extended abstracts describing ongoing projects were also included in the proceedings.