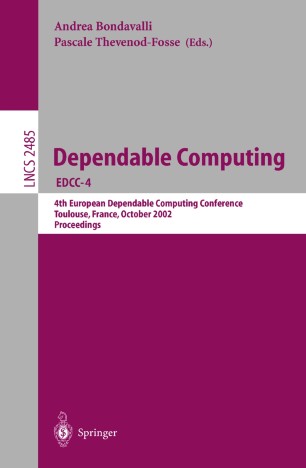 It was with great pleasure that, on behalf of the entire organizing committee, I welcomed participants to EDCC-4, the Fourth European Dependable Computing Conference, held for the ?rst time in France. The fourth issue of EDCC carried on the traditions established bythe previous conferences in this series: EDCC-1 was held in Berlin (Germany) in October 1994, EDCC-2 in Taormina (Italy) in October 1996, and EDCC-3 in Prague (Czech Republic) in September 1999. EDCC evolved from a merger of tow other conference series at the moment when the Iron Curtain fell. One of these, known as the ”International Conf- ence on Fault-Tolerant Computing Systems”, was organized during the period 1982–1991, bythe German Technical Interest Group ”Fault-Tolerant Computing Systems”. The other series, known as the ”International Conference on Fault- Tolerant Systems and Diagnostics”, was organized during the period 1975–1990 in the former Czechoslovakia, Poland, Bulgaria, and the former GDR. The c- position of the EDCC steering committee and the organizing committees of the successive issues of the conference have mirrored the East–West uni?cation ch- acter of the conference series. The EDCC conference is becoming a unique meeting point for researchers and practitioners from all over the world in the ?eld of Dependable Systems. It is organized bythe SEE Working Group ”Dependable Computing” in France, the GI/ITG/GMA Technical Committee on Dependabilityand Fault Tolerance in Germany, and the AICA Working Group ”Dependability of Computer Systems” in Italy. Furthermore, committees of several global professional organizations, such as IEEE and IFIP, support the conference.