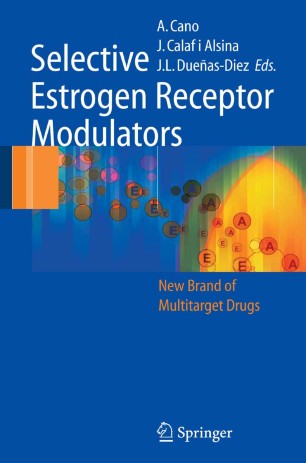 A New Brand of Multitarget Drugs

The increasing awareness on the varied consequences of hypogonadism in distinct organs and systems has supported the notion of estrogens as systemic agents. This observation is congruent with the variety of tissues affected by - trogens when used in hormone therapy formulations on hypogonadic women. Apart from the genital tract and the breast, recognized as traditional targets for estrogens, the skeleton, the vascular tree, or the central nervous system, are good examples of territories that have demonstrated sensitivity to estrogens. This evidence has created great interest, as shown by the great amount of lit- ature that has been produced on the bene?ts and risks associated with the use of estrogens. In parallel to the clinical interest, basic research has improved our kno- edge on the complexities involved in estrogen action at the molecular level. Together with effects mediated through speci?c receptors, a concept that has been the mainstay of the interpretation of estrogen action for years, there is enough evidence to hold the notion of receptor-independent effects. The substantial advances in modern technology applied to research have helped in enlightening the particulars of this versatile action of estrogens. This more detailed knowledge on the sophisticated mechanism of action of estrogens has nourished the emergence of multiple hypotheses speculating with the p- sibility of manipulating estrogen action. The notion that a widely extended regulatory system of cell function, as it is the estrogen receptor machinery, might be modulated at wish has arisen as an attractive, although still elusive postulate.