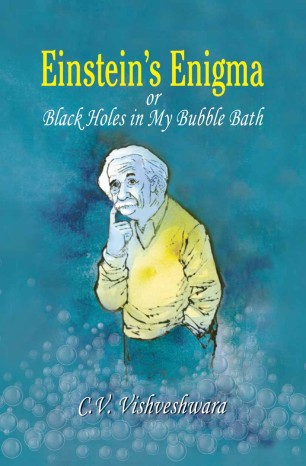 Einstein’s Enigma or Black Holes in My Bubble Bath

"The bubbles were swirling all around me massaging my body ... As I luxuriated in this fantastic bubble bath, my eyes grew heavy and I drifted into a supremely blissful slumber." So begins Alfie's encounter with a remarkable and revelatory bathtub purchased from a mysterious neighbour named Al. Einstein's Enigma or Black Holes in My Bubble Bath tells the story of gravitation theory from the early historic origins to the latest developments in astrophysics, focusing on Albert Einstein's theory of general relativity and black-hole physics. Through engaging conversations and napkin-scribbled diagrams come tumbling the rudiments of relativity, spacetime and much of modern physics, narrated with high didactic and literary talent, and each embedded in casual lessons given by a worldly astrophysicist to his friend Alfie, a freelance organiser of proposals. Join the intellectual fun and exalt in the frothy ideas while vicariously taking relaxing baths in this magical bathtub.

Prof. C.V. Vishveshwara is a renowned theoretical physicist, who participated in the golden age of black-hole physics, making pioneering contributions. Also an enthusiastic teacher and planetarium director, he has written several popular-level articles, scripts for planetarium shows and produced documentary movies on science.

"Beautifully written and thoroughly entertaining, Vishveshwara's "Einstein's Enigma" provides an authoritative but distinctly original approach to an explanation of basics and subtleties of Einstein's general relativity and of the astrophysics of black holes. I warmly recommend it to beginner and expert alike."

Prof. Roger Penrose, author of  Shadows of the Mind and The Road to Reality

"The main dish in this feast is a clear and sound presentation of the science underlying black holes from a distinguished scientist who has been contributing to their study since before they were named. Furthermore this science is presented in a sauce of philosophy, history, literature, gastronomy and imagination from an entertaining personality who needs several alter egos to show all the different ways he can think about his subject. Among the cartoons and drawings are the few lines of optional mathematics which are included for those who like that approach."

"The unusual format and whimsical style of "Einstein's Enigma" should not obscure the fact that this is a serious book, which aims to get across the essentials of the theory of general relativity and some related topics to a readership which is not assumed to be fluent in advanced mathematics.
I believe the author, who has a long experience in presenting this kind of material to non-specialist audiences, has succeeded in the task he has set himself; the book will amply repay sustained and diligent reading by even a totally unmathematical reader."