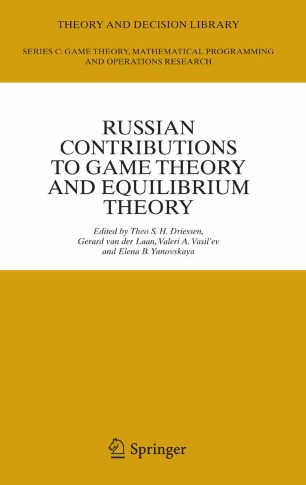 V.A. Vasil’ev and E.B. Yanovskaya 1 Game theory in the USSR before 1990 In this introductory chapter ?rst a short historical information about the development of game theory in the USSR before the 1990s is given. It should help to understand the choice of the papers in this volume. The development of game theory in the USSR began in the early sixties. N.N.Vorob’ev (1925- 1995) was the author of the ?rst papers about game theory in Russian; he was also the leader of a group of PhD students and young researchers at Leningrad who studied this new ?eldinmathematics. The early papers by Vorob’ev on enumerating equilibrium points in - matrix games ([74]), coalitional games where a player may belong to di erent coalitions ([77] and [78]) and equivalence of di erent types of strategies in games in extensive form ([75] and [76]), were published in Soviet journals having English translations, and so they became known in the West. Later on, game theory in the USSR exhibited signi?cant progress, which deserved world-wide attention. However, many game-theoretic papers were published in Soviet journals and edited volumes which have never been translated into English. In the 1960s, the theory of zero-sum games was popular in the USSR.