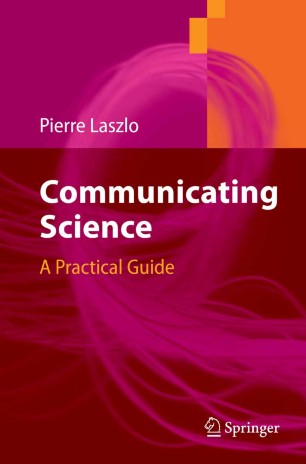 Have you new and interesting, or even outstanding, scientific results that you want to be recognized by your scientific colleagues, or be understood by the public? Or do you want to address decision makers to change their minds? Then, Laszlo’s Communicating Science may be the book to consult.

It has two main parts, corresponding to the type of communication task at hand: addressing peers and the general public, plus a third briefer section on how to inform decision-makers.

Each of the main parts is subdivided into two sections, Guidelines and Genres, with entries arranged in alphabetical order. The guidelines are devoted to entries such as acronyms, active or passive voice, body language, figures and captions, introduction, irony, and taking the floor. Within genres, all possible media of communicating science are treated, e.g. the after-dinner speech, conference presentation, keynote lecture, magazine article, research proposal, and teleconference.

Laszlo, a professional scientist, had a career embracing both academia and industrial consulting. He has extensive experience in authoring and editing papers, books and popular science books and conveys his skills as a communicator in this concise guide. The book is geared to engineers and scientists, educators and journalists, science administrators and the medical profession, editors and publishers, whether native or non-native-speakers - in short to anyone having to convert scientific data into an easily intelligible and interesting narrative.

"Pierre Laszlo, emeritus professor of chemistry at the École polytechnique and the University of Liège, has been keeping notes - and not just on organic syntheses. A prolific author of essays, books and plays as well as scholarly articles, Laszlo knows a thing or two about the challenging but central aspect of science called communcation - and like a good chemist, he has now collected and published his notes in a manual. Communicating Science is a handbook for the helpless scientist. It is organized for emergency use; there's even a quick index in the back with entries such as "accessories: glass of water" and "how to: deal with hecklers." In his coverage of topics ranging from technical writing to media interviews, Laszlo conveys a life-time of experience in advice both pithy and provocative. I cannot argue with his taste: He holds up American Scientist essayists as models and urges scientists to get along with editors. And he would approve of the type conveying these words to you. Serifs, he notes, "are the small slippers which letters bear on their feet." To keep the viewer's eye moving along the type in a slide presentation, Laszlo would forgo sans serif fonts, "however sexy they may look," and supply slippers."

"The content takes a commendably wide-ranging view of communication, embracing the after-dinner speech, conference presentation, keynote lecture, magazine article, research proposal, press release and obituary. Laszlo is a professional scientist … . he allows this knowledge and experience of the field to shine through, and this is when the book is at its best, written in a style which is entertaining and engaging. … Overall, the book contains some useful tips that could point the novice science communicator in the right direction … ." (Sue Assinder, Microiology Today, June, 2007)

“This book consists of three parts, corresponding to the different audiences to which scientists might wish to communicate their science: peer scientists, the general public, and decision-makers in politics, business, and courtrooms. … Laszlo provides, in alphabetical order, general guidelines for content preparation, interaction with the audiences, and general conduct, and then a discussion of different genres of science communication. … The guidelines are written for individual fellow scientists and science students … .” (Joachim Schummer, Ambix, Vol. 57 (1), March, 2010)