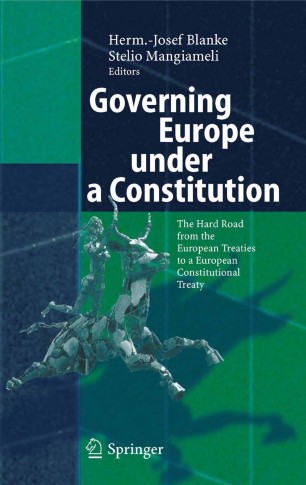 Governing Europe under a Constitution

At the summit in Laeken in December 2001 the European Council opened the debate on the reform of the supranational structures through its "Declaration on the Future of the European Union" and proposed a wide-ranging agenda. The European Convention, with the mandate of the European Council, has been forming proposals for a more democratic, transparent and efficient European Union and presented a draft of a Treaty establishing a Constitution for Europe on 20th of June 2003. On these fundaments the Intergovernmental Conference finally came to a compromise in summer 2004 after wrestling especially with the problem of qualified majority voting within the Council. On 29th of October 2004 the Heads of State and Governments of the 25 Member States signed the Treaty. After the French and Dutch citizens refused their approval of the Treaty in referendums the future of the draft Constitution remains uncertain. The volume contains articles from high-ranking experts from politics and academia of different Member States about the basic principles of the actual constitutional law of the European Union and its need of reform through a Constitution for Europe. By analysing the rules to govern a Europe of 25 and in time 28 and more Member States the publication intends to make a contribution to the emerging "Ius Publicum Europaeum".