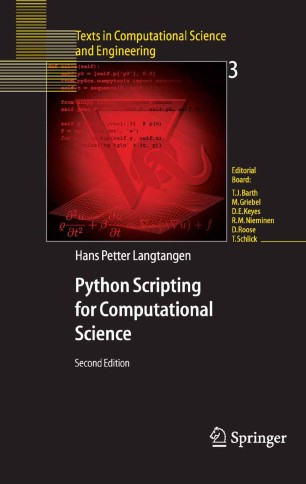 Part of the Texts in Computational Science and Engineering book series (TCSE, volume 3)

The second edition features new material, reorganization of text, improved examples and software tools, updated information, and correction of errors. This is mainly the result of numerous eager readers around the world who have detected misprints, tested program examples, and suggested alternative ways of doing things. I am greatful to everyone who has sent emails and contributed with improvements. The most important changes in the second edition are brie?y listed below. Already in the introductory examples in Chapter 2 the reader now gets a glimpse of Numerical Python arrays, interactive computing with the IPython shell, debugging scripts with the aid of IPython and Pdb, and turning “?at” scripts into reusable modules (Chapters 2. 2. 5, 2. 2. 6, and 2. 5. 3 are added). Several parts of Chapter 4 on numerical computing have been extended (- pecially Chapters 4. 3. 5, 4. 3. 7, 4. 3. 8, and 4. 4). Many smaller changes have been implemented in Chapter 8; the larger ones concern exemplifying Tar archives instead of ZIP archives in Chapter 8. 3. 4, rewriting of the material on generators in Chapter 8. 9. 4, and an example in in Chapter 8. 6. 13 on adding new methods to a class without touching the original source code and without changing the class name. Revised and additional tips on op- mizing Python code have been included in Chapter 8. 10. 3, while the new Chapter 8. 10.