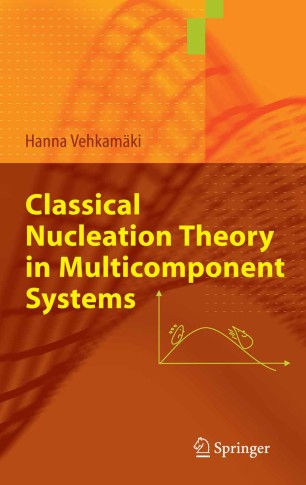 Nucleation is the initial step of every first-order phase transition, and most phase transitions encountered both in everyday life and industrial processes are of the first-order. Using an elegant classical theory based on thermodynamics and kinetics, this book provides a fully detailed picture of multi-component nucleation. As many of the issues concerning multi-component nucleation theory have been solved during the last 10-15 years, it also thoroughly integrates both fundamental theory with recent advances presented in the literature.

Classical Nucleation Theory in Multicomponent Systems serves as a textbook for advanced thermodynamics courses, as well as an important reference for researchers in the field. The main topics covered are: the basic relevant thermodynamics and statistical physics; modelling a molecular cluster as a spherical liquid droplet; predicting the size and composition of the nucleating critical clusters; kinetic models for cluster growth and decay; calculating nucleation rates; and a full derivation and application of nucleation theorems that can be used to extract microscopic cluster properties from nucleation rate measurements.

The assumptions and approximations needed to build the classical theory are described in detail, and the reasons why the theory fails in certain cases are explained. Relevant problems are presented at the end of each chapter.