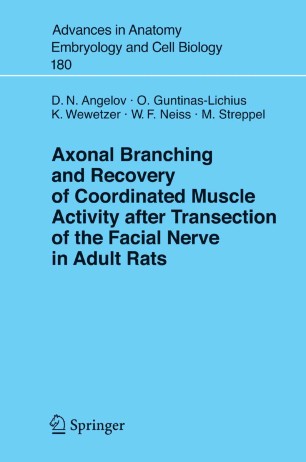 Facial nerve surgery inevitably leads to partial pareses, abnormally associated movements and pathologically altered reflexes. The reason for this "post-paralytic syndrome" is the misdirected reinnervation of targets, which consists of two major components. First, due to malfunctioning axonal guidance, a muscle gets reinnervated by a "foreign" axon, that has been misrouted along a "wrong" fascicle. Second, the supernumerary collateral branches emerging from all transected axons simultaneously innervate antagonistic muscles and cause severe impairment of their coordinated activity. Since it is hardly possible to influence the first major component and improve the guidance of several thousands axons, the authors concentrated on the second major component and tried to reduce the collateral axonal branching.