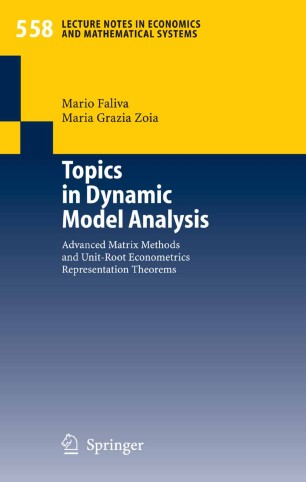 Classical econometrics - which plunges its roots in economic theory with simultaneous equations models (SEM) as offshoots - and time series econometrics - which stems from economic data with vector autoregr- sive (VAR) models as offsprings - scour, like the Janus's facing heads, the flowing of economic variables so as to bring to the fore their autonomous and non-autonomous dynamics. It is up to the so-called final form of a dy­ namic SEM, on the one hand, and to the so-called representation theorems of (unit-root) VAR models, on the other, to provide informative closed form expressions for the trajectories, or time paths, of the economic vari­ ables of interest. Should we look at the issues just put forward from a mathematical standpoint, the emblematic models of both classical and time series econometrics would turn out to be difference equation systems with ad hoc characteristics, whose solutions are attained via a final form or a represen­ tation theorem approach. The final form solution - algebraic technicalities apart - arises in the wake of classical difference equation theory, display­ ing besides a transitory autonomous component, an exogenous one along with a stochastic nuisance term. This follows from a properly defined ma­ trix function inversion admitting a Taylor expansion in the lag operator be­ cause of the assumptions regarding the roots of a determinant equation pe­ culiar to SEM specifications.