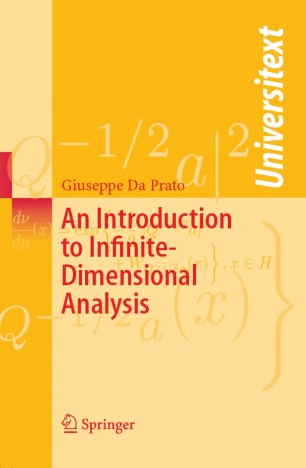 An Introduction to Infinite-Dimensional Analysis

In this revised and extended version of his course notes from a 1-year course at Scuola Normale Superiore, Pisa, the author provides an introduction – for an audience knowing basic functional analysis and measure theory but not necessarily probability theory – to analysis in a separable Hilbert space of infinite dimension.

Starting from the definition of Gaussian measures in Hilbert spaces, concepts such as the Cameron-Martin formula, Brownian motion and Wiener integral are introduced in a simple way. These concepts are then used to illustrate some basic stochastic dynamical systems (including dissipative nonlinearities) and Markov semi-groups, paying special attention to their long-time behavior: ergodicity, invariant measure. Here fundamental results like the theorems of  Prokhorov, Von Neumann, Krylov-Bogoliubov and Khas'minski are proved. The last chapter is devoted to gradient systems and their asymptotic behavior.