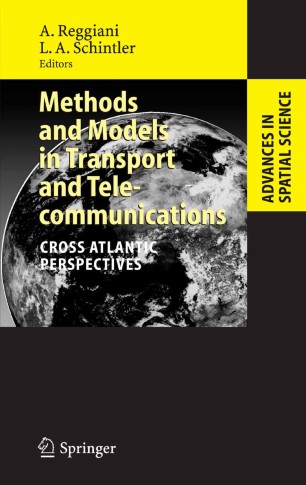 Methods and Models in Transport and Telecommunications

One aspect of the new economy is a transition to a networked society, and the emergence of a highly interconnected, interdependent and complex system of networks to move people, goods and information. An example of this is the in creasing reliance of networked systems (e. g. , air transportation networks, electric power grid, maritime transport, etc. ) on telecommunications and information in frastructure. Many of the networks that evolved today have an added complexity in that they have both a spatial structure – i. e. , they are located in physical space but also an a spatial dimension brought on largely by their dependence on infor mation technology. They are also often just one component of a larger system of geographically integrated and overlapping networks operating at different spatial levels. An understanding of these complexities is imperative for the design of plans and policies that can be used to optimize the efficiency, performance and safety of transportation, telecommunications and other networked systems. In one sense, technological advances along with economic forces that encourage the clustering of activities in space to reduce transaction costs have led to more efficient network structures. At the same time the very properties that make these networks more ef ficient have also put them at a greater risk for becoming disconnected or signifi cantly disruptedwh en super connected nodes are removed either intentionally or through a targeted attack.