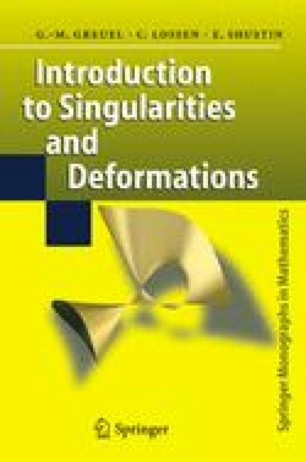 Introduction to Singularities and Deformations

Singularity theory is a field of intensive study in modern mathematics with fascinating relations to algebraic geometry, complex analysis, commutative algebra, representation theory, theory of Lie groups, topology, dynamical systems, and many more, and with numerous applications in the natural and technical sciences.

This book presents the basic singularity theory of analytic spaces, including local deformation theory, and the theory of plane curve singularities. Plane curve singularities are a classical object of study, rich of ideas and applications, which still is in the center of current research and as such provides an ideal introduction to the general theory. Deformation theory is an important technique in many branches of contemporary algebraic geometry and complex analysis. This introductory text provides the general framework of the theory while still remaining concrete.

In the first part of the book the authors develop the relevant techniques, including the Weierstraß preparation theorem, the finite coherence theorem etc., and then treat isolated hypersurface singularities, notably the finite determinacy, classification of simple singularities and topological and analytic invariants. In local deformation theory, emphasis is laid on the issues of versality, obstructions, and equisingular deformations. The book moreover contains a new treatment of equisingular deformations of plane curve singularities including a proof for the smoothness of the mu-constant stratum which is based on deformations of the parameterization. Computational aspects of the theory are discussed as well. Three appendices, including basic facts from sheaf theory, commutative algebra, and formal deformation theory, make the reading self-contained.

The material, which can be found partly in other books and partly in research articles, is presented from a unified point of view for the first time. It is given with complete proofs, new in many cases. The book thus can serve as source for special courses in singularity theory and local algebraic and analytic geometry.