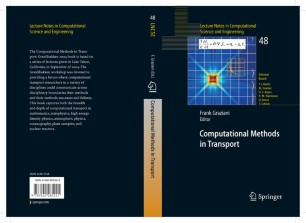 Thereexistawiderangeofapplicationswhereasigni?cantfractionofthe- mentum and energy present in a physical problem is carried by the transport of particles. Depending on the speci?capplication, the particles involved may be photons, neutrons, neutrinos, or charged particles. Regardless of which phenomena is being described, at the heart of each application is the fact that a Boltzmann like transport equation has to be solved. The complexity, and hence expense, involved in solving the transport problem can be understood by realizing that the general solution to the 3D Boltzmann transport equation is in fact really seven dimensional: 3 spatial coordinates, 2 angles, 1 time, and 1 for speed or energy. Low-order appro- mations to the transport equation are frequently used due in part to physical justi?cation but many in cases, simply because a solution to the full tra- port problem is too computationally expensive. An example is the di?usion equation, which e?ectively drops the two angles in phase space by assuming that a linear representation in angle is adequate. Another approximation is the grey approximation, which drops the energy variable by averaging over it. If the grey approximation is applied to the di?usion equation, the expense of solving what amounts to the simplest possible description of transport is roughly equal to the cost of implicit computational ?uid dynamics. It is clear therefore, that for those application areas needing some form of transport, fast, accurate and robust transport algorithms can lead to an increase in overall code performance and a decrease in time to solution.