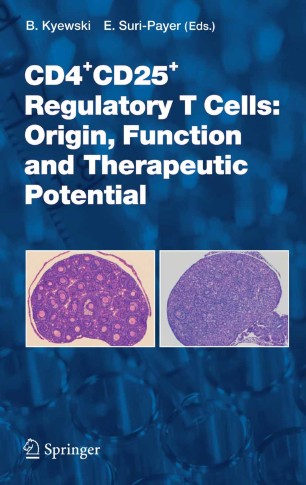 The vertebrate immune system defends the organism against invading pathogens while at the same time being self-tolerant to the body’s own constituents thus preserving its integrity. Multiple mechanisms work in concert to ensure self-tolerance. Apart from purging the T cell repertoire from auto-reactive T cells via negative selection in the thymus dominant tolerance exerted by regulatory T cells plays a major role in tolerance imposition and maintenance. Among the various regulatory/suppressive cells hitherto described, CD4+CD25+ regulatory T cells (Treg) and interleukin-10 producing T regulatory 1 (Tr1) cells have been studied in most detail and are the subject of most articles in this issue. Treg, also called "natural" regulatory T cells, will be traced from their intra-thymic origin to the site of their action in peripheral lymphoid organs and tissues.

The repertoire of Treg is clearly biased towards recognition of self-antigens, thereby potentially preventing autoimmune diseases such as gastritis and oophoritis. Regulatory T cells, however also control infections, allergies and tolerance to transplanted tissues and this requires their induction in the periphery under conditions which are not yet fully understood. The concept of dominant tolerance, by far not novel, will offer new insights and hopefully tools for the successful treatment of autoimmune diseases, improved cancer immunotherapy and transplant survival. The fulfillment of these high expectations will, however, require their unambiguous identification and a better understanding of their mode of action.