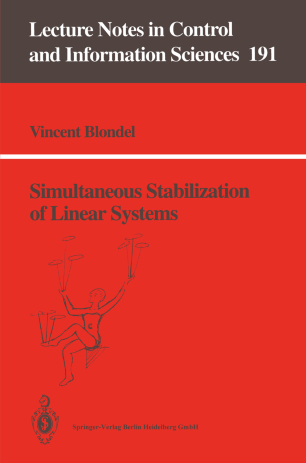 Simultaneous Stabilization of Linear Systems is devoted to a single question from Linear Systems Theory: "When is it possible to find a controller that stabilizes a finite family of systems?", known as the Simultaneous Stabilization Question. This question is satisfactorily solved when the number of systems is limited to two but is open for three or more systems. This constitutes one of the important, longstanding open problems in Linear Systems Theory. Dr. Blondel reviews partial answers and discusses partial answers with equivalent formulations of the problem. Particular emphasis is placed on interlacement conditions. The parity and the interlacing conditions are presented in a clear and unified framework. The final chapter "proves" the latest research progress and shows that, contrary to most of the questions in Linear Systems Theory, there exists no necessary and sufficient conditions for simultaneous stabilization of three or more systems that involve only the coefficients of the systems and a combination of rational operations.