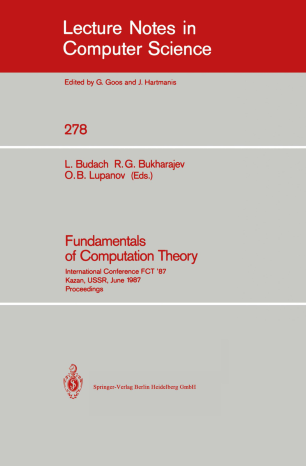 This volume contains abridged versions of most of the sectional talks and some invited lectures given at the International Conference on Fundamentals of Computation Theory held at Kazan State University, Kazan, USSR, June 22-26, 1987. The conference was the sixth in the series of FCT Conferences organized every odd year, and the first one to take place in the USSR. FCT '87 was organized by the Section of Discrete Mathematics of the Academy of Sciences in the USSR, the Moscow State University (Department of Discrete Mathematics), and the Kazan State University (Department of Theoretical Cybernetics). This volume contains selected contributions to the following fields: Mathematical Models of Computation, Synthesis and Complexity of Control Systems, Probabilistic Computations, Theory of Programming, Computer-Assisted Deduction. The volume reflects the fact that FCT '87 was organized in the USSR: A wide range of problems typical of research in Mathematical Cybernetics in the USSR is comprehensively represented.