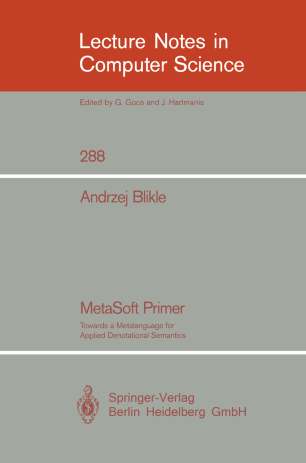 Towards a Metalanguage for Applied Denotational Semantics

The book is devoted to a simplified set-theoretic version of denotational semantics where sets are used in place of Scott's reflexive domains and where jumps are described without continuations. This approach has emerged as a reaction to the sophisticated model of traditional semantics. It was also strongly stimulated by the applications of denotational semantics and especially by its software-industry oriented version known as VDM (Vienna Development Method). The new approach was successfully tested on several examples. Based on this approach the Polish Academy of Sciences created the project MetaSoft aimed at the development of a definitional metalanguage for software engineering. The approach has also been chosen in the project RAISE (ESPRIT) which aims at a similar goal. The book consists of two parts. Part One is devoted to the mathematical foundations of the future definitional metalanguage of MetaSoft. This part also introduces an appropriate notation. Part Two shows the applications of this metalanguage. There the denotational definition of a subset of Pascal is discussed with particular emphasis on Pascal types.