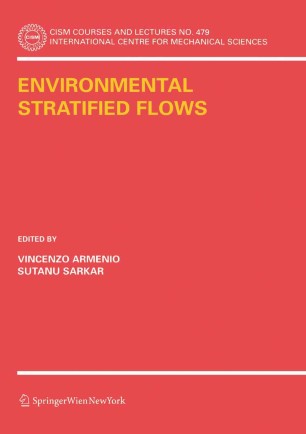 Stratified flows, common in environmental and geophysical applications, are char­ acterized by the variation of fluid density in the vertical direction that can result in qualitative and quantitative modifications of the flow patterns by buoyancy . Unstable stratification (dense water/air above light water/air) increases the ver­ tical mixing by generation of convective cells while stable stratification generally suppresses vertical mixing of mass and momentum. Even so, a stably stratified fluid can support internal waves, instabilities and turbulence that play a critical role in transport and mixing. The ocean is predominantly subject to stable stratification which, under exter­ nal excitation, supports an environment of internal waves which may then break and generate turbulence. Wind forcing, currents and convective plumes are other sources of turbulence in the ocean. In the ocean, stratified turbulence mediates the upward transport of bottom water, nutrients, chemical and biological species, and pollutants. In the atmosphere, stratification affects the transport of pollutants released at ground level, a critical problem being the thermal inversion in urban areas that causes the stagnation of pollutants and small particulate (PM2.5 to PMIO) in the lower part of the atmospheric boundary layer. In buildings, strat­ ification governs the circulation of air and heat in natural ventilation systems.