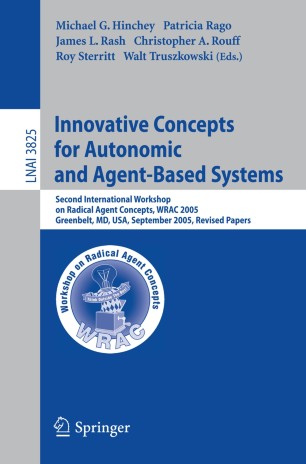 The second WRAC, NASA/IEEE Workshop on Radical Agent Concepts, was held at NASA Goddard Space Flight Center, Greenbelt, MD, September 20–22, 2005. The workshop was sponsored by the Information Systems Division of NASA Goddard and IEEE Computer Society Technical Committee on Complexity in Computing and IEEE Task Force on Autonomous and Autonomic Systems. The workshop also received generous financial support from IBM, without which the workshop would not have been possible. Agent technology, along with autonomous and autonomic computing, has emerged as a major field in computing, and will greatly influence the future development of complex computer-based systems. The area of research is strongly influenced by the autonomic computing initiative as well as by developments in biologically inspired computing, and involves interdisciplinary interaction from those involved in research in social intelligence, psychology, arts, biology, computer science, computer communications and philosophy. This volume includes revised versions of papers presented at the workshop. The workshop was structured so as to allow adequate time for discussion and interaction, to exchange ideas and reflect on the motivations, scientific grounds and practical consequences of the concepts presented. Many of the ideas are truly “radical”, and so authors were given time to revise their papers to reflect further thoughts on the ideas presented and to reflect feedback received at the workshop. We are grateful to Jeff Kephart for a very interesting keynote speech describing IBM’s current and future work in this field, which fit very well with the aims and scope of the workshop.