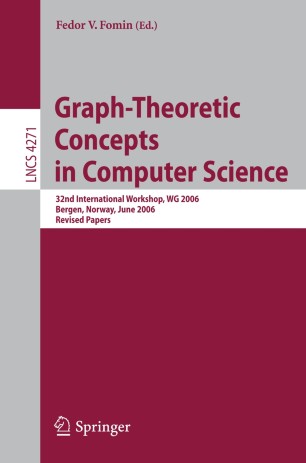 The 32nd International Workshop on Graph-Theoretic Concepts in Computer Science (WG 2006) was held on the island of Sotra close to the city of Bergen on the west coast of Norway. The workshop was organized by the Algorithms Research Group at the Department of Informatics, University of Bergen, and it took place from June 22 to June 24. The 78 participants of WG 2006 came from the universities and research institutes of 17 di?erent countries. The WG 2006 workshop continues the series of 31 previous WG workshops. Since 1975,WG has taken place 20 times in Germany, four times in The Neth- lands, twice in Austria as well as oncein France,in Italy, in Slovakia,in Switz- land and in the Czech Republic, and has now been held for the ?rst time in Norway. The workshop aims at uniting theory and practice by demonstrating how graph-theoretic concepts can be applied to various areas in computer s- ence, or by extracting new problems from applications. The goal is to present recent research results and to identify and explore directions of future research. The talks showed how recent researchresults from algorithmic graph theory can be used in computer science and which graph-theoreticquestions arisefrom new developments in computer science. There were two fascinating invited lectures by Hans Bodlaender (Utrecht, The Netherlands) and Tandy Warnow (Austin, USA).