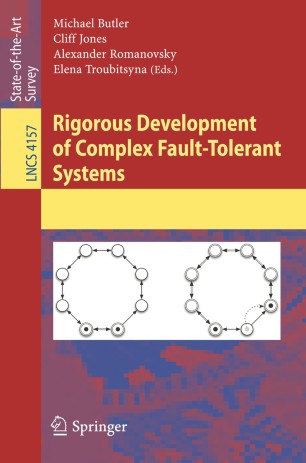 Many software systems have reached a level of complication, mainly because of their size, heterogeneity and distribution, which results in faults appearing that cannot be traced back easily to the code. Some of these "faults" could also be unexpected program behavior that appears as a result of interactions between different parts of the program; this is commonly known as complexity. New methods, approaches, tools and techniques are needed to cope with the increasing complexity in software systems; amongst them, fault-tolerance techniques and formal methods, supported by the corresponding tools, are promising solutions. This book brings together papers focusing on the application of rigorous design techniques to the development of fault-tolerant, software-based systems.

This volume is an outcome of the REFT 2005 Workshop on Rigorous Engineering of Fault-Tolerant Systems held in conjunction with the Formal Methods 2005 conference at Newcastle upon Tyne, UK, in July 2005. The authors of the best workshop papers were asked to enhance and expand their work and a number of well-established researchers working in the area contributed invited chapters. From the 19 refereed and revised papers presented, 12 are versions reworked from the workshop; 9 of them are totally new. The book is rounded off by two provocatively different position on the role of programming languages.