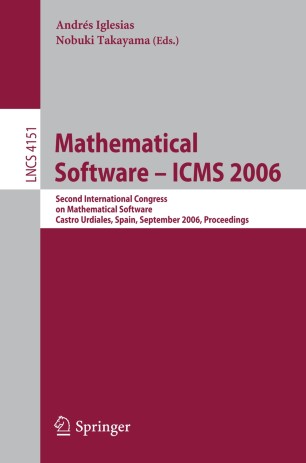 This volume contains the outstanding collection of invited papers and refereed papers selected for the Second International Congress on Mathematical Software, ICMS 2006, held in Castro Urdiales, Spain, September 1-3, 2006. We cordially invite you to visit the ICMS 2006 website http://www.icms2006.unican.es where you can find all relevant information about this interesting event. ICMS 2006 was the second edition of this congress, which follows up the successful ICMS 2002 held in Beijing, China. Since its inception, this congress has been a satellite event of the International Congress of Mathematicians - ICM, the world’s largest conference on mathematics, celebrated every four years since the edition of 1900 in Paris, where David Hilbert presented his 23 famous problems. For the first time, this 2006 edition of ICM is held in Spain (see: http://www.icm2006.org for details), and so is ICMS 2006. This congress was devoted to all aspects of mathematical software, whose appearance is — in our opinion — one of the most important events in mathematics. Mathematical software systems are used to construct examples, to prove theorems, and to find new mathematical phenomena. Conversely, mathematical research often motivates developments of new algorithms and new systems. Beyond mathematics, mathematical software systems are becoming indispensable tools in many branches of science and technology.