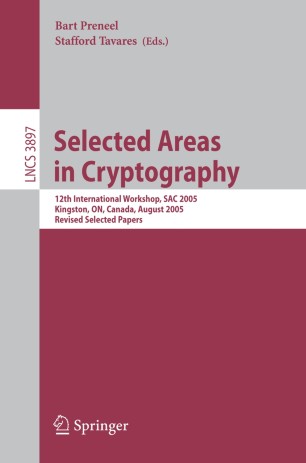 SAC 2005 was the 12th in a series of annual workshops on Selected Areas in Cryptography. This was the 5th time the workshop was hosted by Queen’s U- versity in Kingston (the previous workshops were held here in 1994, 1996, 1998 and 1999).Other SAC workshopshave been organizedat Carleton University in Ottawa (1995, 1997 and 2003), the Fields Institute in Toronto (2001), Memorial University of Newfoundland in St. John’s (2002) and the University of Waterloo (2000 and 2004). The workshop provided a relaxed atmosphere in which - searchers in cryptography could present and discuss new work on selected areas of current interest. The themes for SAC 2005 were: – design and analysis of symmetric key cryptosystems; – primitives for symmetric key cryptography, including block and stream - phers, hash functions, and MAC algorithms; – e?cient implementations of symmetric and public key algorithms; – cryptographic algorithms and protocols for ubiquitous computing (sensor networks, RFID). A total of 96 papers were submitted. Three papers were not considered - cause they were identi?ed as being multiple submissions. After an extensive double-blind reviewing process, the program committee accepted 25 papers for presentation at the workshop. We were very fortunate to have two invited speakers at SAC 2005, who both delivered thought-provoking and entertaining talks: – Alfred Menezes: Another Look at Provable Security; – Mike Wiener: The Full Cost of Cryptanalytic Attacks.