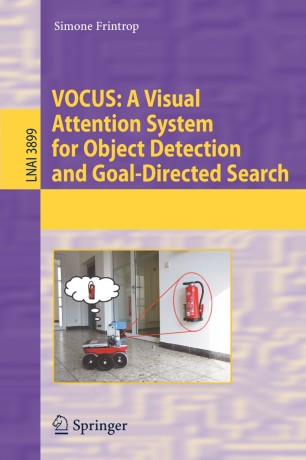 Object detection and recognition is a topic of significant interest in computer and robot vision. It is required in most applications of computational vision, for example, biometric systems, medical imaging, intelligent cars, factory automation, and image databases.

One of the major challenges in designing object recognition systems is to construct methods that are fast and capable of operating on standard computer platforms. The more developed such systems become, the more urgent becomes the need for a pre-selection system that enables subsequent processing to focus only on relevant data. One mechanism to achieve this is visual attention: it selects regions in a visual scene that are most likely to contain objects of interest. The field of visual attention is currently the focus of much research for both biological and artificial systems.

This monograph presents a complete computational system for visual attention and object detection: VOCUS (Visual Object detection with a CompUtational attention System) is a system capable of automatically selecting regions of interest in images and detecting specific objects. It represents a major step forward on integrating data-driven and model-driven information into a single framework. Additionally, the volume contains an extensive review of the literature on visual attention, detailed evaluations of VOCUS in different settings, and applications of the system in the context of object recognition and robotics.