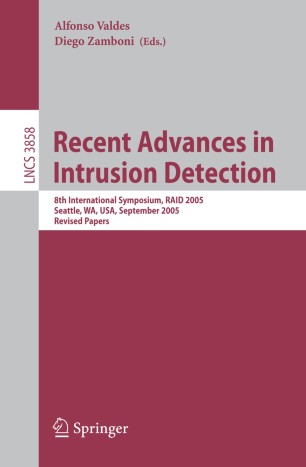 On behalf of the Program Committee, it is our pleasure to present the proceedings of the 8th Symposium on Recent Advances in Intrusion Detection (RAID 2005), which took place in Seattle, Washington, USA, September 7-9, 2005. The symposium brought together leading researchers and practitioners from academia, government and industry to discuss intrusion detection from research as well as commercial prospectives. We also encouraged discussions that addressed issues that arise when studying intrusion detection, including monitoring, performance and validation, from a wider perspective. We had sessions on the detection and containment of Internet worm attacks, anomaly detection, automated response to intrusions, host-based intrusion detection using system calls, network intrusion detection, and intrusion detection, in mobile wireless networks. The RAID 2005 Program Committee received 83 paper submissions from all over the world. All submissions were carefully reviewed by several members of Program Committee and selection was made on the basis of scientific novelty, importance to the field, and technical quality. Final selection took place at a Program Committee meeting held on May 11 and 12 in Oakland, California. Fifteen papers and two practical experience reports were selected for presentation and publication in the conference proceedings. The keynote address was given by Phil Attfield of the Northwest Security Institute.